What is Elbow Bursitis (Olecranon Bursitis)? 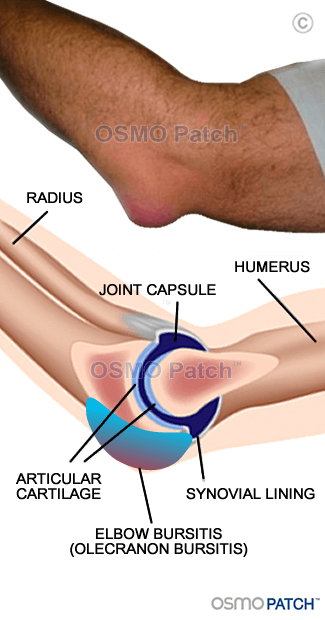 Olecranon bursitis is the proper name for the inflammatory condition ‘elbow bursitis’. Elbow pain due to olecranon bursitis occurs when a small bursa within the elbow (which normally acts as a small cushion between bones and tendons) becomes inflamed and swollen. This can occur for several reasons which will be discussed below.

Another name often given to this condition is ‘Poppy Elbow’ due to the large lump that may appear on the elbow.

As mentioned above, the elbow is very susceptible to injury. Below are some of the common causes for elbow bursitis.

What are the Symptoms of Bursitis in the Elbow?

Signs and symptoms of bursitis in the elbow may include:

How is Elbow Bursitis Diagnosed?

It is always best to visit a qualified medical professional if you suspect that you have bursitis in the elbow prior to starting any treatment in order to get a proper diagnosis.

While elbow bursitis can be assessed by a physical and visual examination it is best to have an x-ray and ultrasound to properly confirm the diagnosis.

Your doctor may also feel that blood tests or aspiration of some of the fluid is required if they suspect an infection or to rule out any other possible causes or co-existing conditions.

Next Page: Learn the answers to the most common questions asked about treating elbow bursitis, including:

GREAT PRODUCT! I HAVE TO ADMIT WHEN I FIRST APPLIED THE PATCH I WAS A BIT SKEPTICAL, BUT AFTER THE FIRST APPLICATION THE SWELLING IN MY ELBOW WAS GREATLY REDUCED! AFTER ABOUT SIX APPLICATIONS THE SWELLING WAS COMPLETELY GONE!! I HAVE BEEN FREE OF BURSITIS FOR SEVERAL MONTHS!

Ronald
United States
Buristis (the size of a hardball) in elbow

So I had buristis (the size of a hardball) in my elbow. Three doctor visits (3) draining visits, but swelling returned instantly. Tried your patches and after 10 apps.  it has completely disappeared!  Thank You

Thank you so much for your attention and immediate response to my e-mail. About 9 months ago I slipped on a latter and banged my elbow which resulted in a bursa sac.  This was the first time ever, but about two months ago it happened again. Your patches worked great both times. They significantly reduced […]

Thank you, I have already used almost all the patches from my last order.  I had a bakers cyst which I think has really improved with the patches.  I also have tennis elbow on one elbow and golfers elbow on the other and I have put the patches on my elbows one nite and there […]

Hi I have had bursitis in my right shoulder for more than three years, after about 6 months of physio, I still have a lot of pain. About 1yr & 2 months ago I developed bursitis in the left shoulder and left elbow, which causes me to have very disturbed sleeps and I cannot sleep […]

Dear Toky: My patches arrived on Feb. 10th. I have now used 9 of the patches, wearing one sometimes during the day. I have noticed significant results, although there is still some swelling in the bursa in my left elbow.

My husband healed his bursitis of the elbow with your patches – they are amazing.  He is now using 2 patches on each knee at night for knee swelling.  It seems to give him amazing relief from cramps in his legs that kept him awake throughout every night for years.  He has used everything from […]

Thank you.  Just to let you know, you’re product is supreme!  Thank you so much.  I’d been suffering with bursitis on my elbow for months, but now it’s totally healed in just two applications.