What is Knee Bursitis? 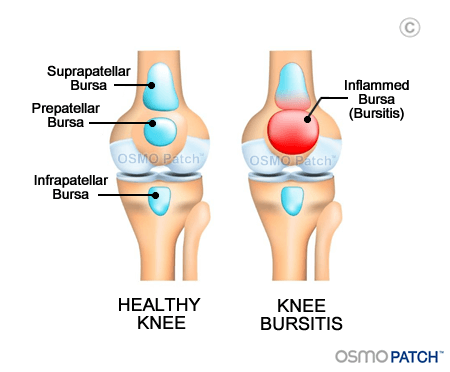 Within and around the knee lie several small cushion like structure called bursae. A bursa allows different tissue types within the knee (such as bones, muscles and tendons) to move smoothly across each other which reduces friction and irritation from occurring in the knee.

When one of these bursae becomes inflamed due to injury they can fill with fluid causing pain and swelling in the knee. This condition is called knee bursitis.

There are four main areas of the knee where bursitis in the knee will occur. These are classified by the region of the knee they affect, and are named as follows;

Bursitis in the knee is normally a result of either trauma due to an impact injury, overuse through work or sports or age related wear and tear. Another less recognized cause can be due to post operative irritation in the knee.

There are also certain jobs where individuals may be more susceptible to developing bursitis in the knee as they require long periods where kneeling on hard surfaces is required. These jobs may include carpenters, plumbers, gardeners and cleaners. In fact prepatellar bursitis is also known as housemaid’s knee.

What are the Symptoms of Knee Bursitis?

Symptoms and signs may include;

Bursitis can occur equally in either knee and may initially present as either right knee pain or left knee pain.

How is Knee Bursitis Diagnosed?

Due to there being several conditions that may present as knee bursitis it is best to visit a qualified medical professional for a proper diagnosis.

To properly diagnose knee bursitis your doctor will likely get you to have both an x-ray and ultra sound of the knee. If there is an infection suspected then a blood test and maybe an aspiration of the synovial fluid may be required for testing and culturing.

In some cases an MRI may also be required to rule out any co-exist conditions that may have contributed to the condition.

Next Page: Learn the answers to the most common questions asked about treating knee bursitis, including:

Dear Friends at MediWise, I had what a nurse practioner at St. Thomas’ Hospital in London called ‘that huge bursa’ on my right knee as a direct result of falling from the top of a railway staircase when the city was inundated with a snowfall and resulting ice.  I received your patches the day before […]

Many thanks Toky….they were fab last time and its now been over 6 months since I have had to use them. Alas it seems my bursitus is back, so hence the need for the wonder patches……I got a bit careless with kneeling on my knee, so all my fault.

Hello Jasmine, I just wanted to say that my husband has been using the patches for a few days now and they have definitely made a difference to his knee, I have brought some more from one of your UK stockists, The Health Workshop, and they, like you, could not have been more helpful. Thank […]

Pamela A
Welshpool Powys, United Kingdom
Bursitis in the knee

Hi I ordered these patches for my son who has terrible bursitis in his knee. He owns a carpet installing business and the constant kicking has really damaged his knee..He took meds..had steroid shot…nothing worked…The doctor told him he needed surgery… I had found your patches on line and they have worked for him. Thanks […]

I had a sac of fluid to the upper-right of my knee. Quite large. Initially I had pulled my calf muscle and without realizing the extent of the pull, I continued to pursue my daily routine which consisted of morning workouts at the gym including “spin” class.  Needless to say, I aggravated the whole situation. […]

Hi, I have used your patches with great success for a bursa that I got when I was thrown from a horse. I have used it also for my husband’s knee. Thanks

Dear Toky, Some time ago I corresponded with you and was duly sent 10 patches to try for bursitis of the knee. As I am a Carmelite Nun, our life is dedicated to prayer so kneeling is rather important!!    I kept off the knee for a long time before trying the patches and found it […]

Dear Danniel, I fell 1.5 metres onto the road, landing on my patella. The pain was severe, and after two weeks on crutches I was left with a fluid-filled bursa the size of half a golf-ball on my knee. I already had a swelling just below my kneecap for five years, and another specialist had […]